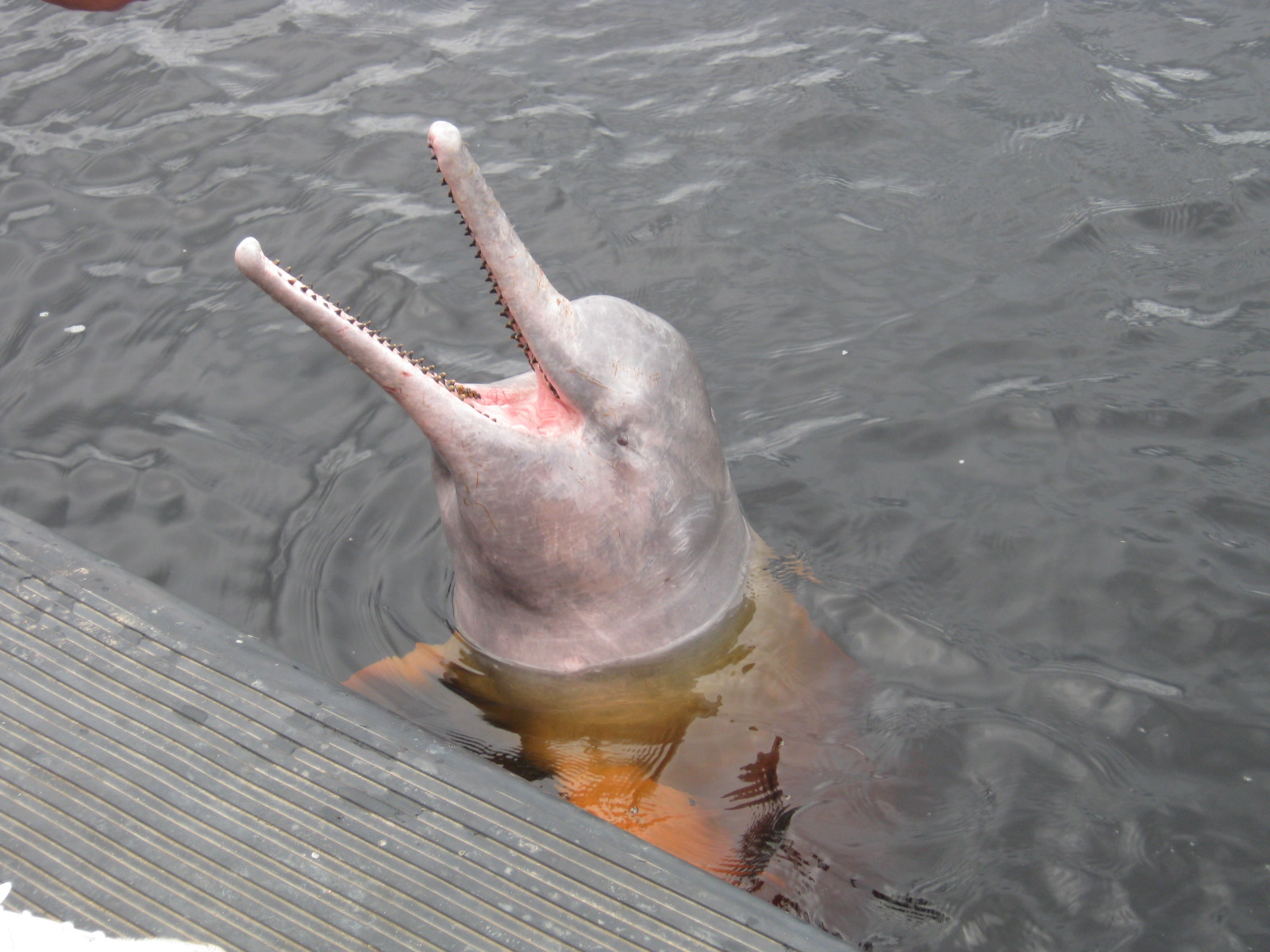 This post written by my ex-MSci student Charlotte Page after the publication of her first paper, based on work she did here in my group at the NHM. Well done Charlotte! Read on for a summary of the paper, and some details on the enigmatic world of river dolphins…

Many toothed dolphin species are elusive, but perhaps the most mysterious are those who inhabit the muddy, fresh waters of our world. As their marine counterparts jump in delight at their ever increasing fame, river dolphins seem to approach life a little more quietly; hiding in the (literal) shadows, they are often hidden from our gaze. Indeed, river dolphins have only recently been launched onto centre stage after scientists failed to find any Yangtze river dolphins (Lipotes vexillifer) on a recent expedition, declaring them most probably extinct (likely due to our anthropogenic ways); and Sir David Attenborough spoke their name on national television (Planet Earth II). Whilst the latter came to the conclusion that no researcher had seen Lipotes in the wild since 1999, the former show cased stunning imagery of a newly described species, the Araguaia river dolphin. As most other river dolphin species, it is almost completely blind, and was only officially recorded as existing in 2014. So naturally, Sir David got to apply his melodic over tones, providing the soundtrack to the first filmed glimpses of these inhabitants of a flooded Brazilian forest, cut off from the ocean by at least 1000 miles.

Still, our apparent lack of knowledge on this mystical grouping extends further. The ‘river dolphins’ consists of three exclusively freshwater, riverine species: 1. Platanista gangetica, the Ganges river dolphin, distributed in the Indian subcontinent, 2. Inia geoffrensis, the Amazon river dolphin, which is largely distributed in South America, and 3. Lipotes vexillifer, the Yangtze river dolphin, originally found in the Yangtze River, China, but as mentioned above is now thought to be extinct in the wild. The fourth species, Pontoporia blainvillei, is found in estuaries and coastal waters off eastern South America. These four species were originally grouped together in the 19th Century based on a number of similar characteristics. Notably, their strangely stocky bodies that are often tinted pink, reduced eye site (to varying extents), large paddle like front flippers, elongated snouts (also called rostrum) and flexible necks. Based on these shared features, the four species where presumed as each other’s nearest relatives.

The reality (or reality so far, science is forever changing how we see the world), is far from this. There is still much debate as to the relationships between the river dolphins and their marine counterparts, but research based on molecular data (opposed to morphology alone) seem to largely agree on the relationships shown by the tree below (Figure 1A).

Analysis consistently group Inia and Pontoporia as closest relatives, with Lipotes as the closest relative to these. The most supported placement of Platanista is as a relative to all other toothed dolphins, excluding the sperm whales and pygmy sperm whales. This means that Platanista is not actually as closely related to the other river dolphins as was previously thought, but instead is quite distantly related to the other river dolphin genera. Hopefully it is clear now why we occasionally like to put quotation marks around ‘river dolphins’.

Nevertheless, river dolphin genera still seem to look alike and seem to pretty much live their lives in similar ways. A new study we conducted in the Natural History Museum’s collections, proves that these similarities are in fact not just skin deep. Convergent evolution is the independent evolution of similar characters in species that are not directly related. An iconic example of convergent evolution is the streamlined body shape of penguins, dolphins and sharks. A bird, a mammal and a fish, all seemingly evolving a similar ‘look’ despite being phylogenetically removed from each other by millions of years. Previous studies have pointed to the river dolphins as showing convergence in the shape of their skulls, which has even indirectly been quantified through investigation of convergence between river dolphins and gharials (a riverine species of crocodile). In particular these studies show that all river dolphin genera have elongated tooth rows, more teeth compared to other dolphin species (up to 250 teeth in Pontoporia compared to 100 in Tursiops, also known as the bottlenose dolphin) and an elongated and fused join between the lower jaw bones (see Figure 1B for a clearer depiction of these features). We further investigated the similarities and differences in the shapes of river dolphin skulls, therefore seeing if we could justify the grouping of these four genera. And this is where museums become handy. Being so elusive, the prospect of going out into the field (spread over two continents) to find all four river dolphin genera, and somehow measure their faces (over a big enough sample to actually do accurate science), is pretty impossible. But imagine a magical place, full of drawers of dolphin skulls (even a single specimen of the now extinct Lipotes), all identified to species level, all in one place. Such a place does exist, and it allowed me to spend the last year of my degree photographing and analysing dolphin skulls.

Using a technique called geometric morphometrics, we were able to compare the shapes of skulls using a system of coordinates called ‘landmarks’. We placed a number of landmarks on pictures of the skulls and mandibles of river dolphins, and their other relatives (all dolphin species minus sperm whales and pygmy sperm whales). Landmarks mark the same points on each species skulls, which allow for the direct comparison of shape changes between them in subsequent analysis. Using these shape coordinates, we then tested whether the river dolphins showed significant convergence when compared to other toothed dolphin species using a number of different methods. 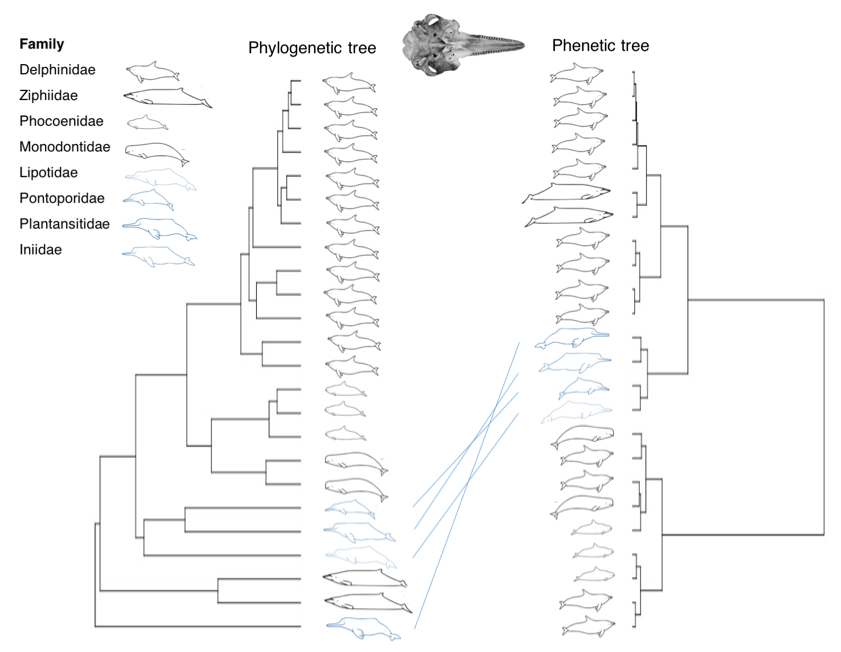 Why might river dolphins show this convergence in shape? Through doing this study, we were also able to identify features of river dolphin skulls that show convergence. In particular, elongation of skull features plays a huge role in the similarities uncovered. Convergent evolution has been attributed to many things (see here for further reading), but in river dolphins, this elongation (specifically, elongated tooth row, mandible and rostrum) relates to feeding mode and diet.

River dolphins are one of the world’s most endangered and least researched groups of mammals. Within the toothed dolphins, these enigmatic animals still remain a mystery. The findings we present provide the foundation for future work into convergence, in addition to justifying a qualitative human classification of the river dolphin grouping based on shared characteristics alone.